Properly Loading and Deploying the Flat LoadComment on this page

One of the largest benefits of a properly loaded flat load is the number of deployment options it offers. The flat load is a drag load designed to be stretched from either side of the apparatus by the crosslay. By properly placing two sets of pulling loops on each side of the apparatus with the nozzle in the middle, you have the option of which side of the apparatus from which to pull the hose, depending on the situation. Also, by having two sets of pulling loops on each side, one or two firefighters can easily deploy this hose load, depending on the situation. You can straighten out the flat load for long stretches or easily pull it for short stretches by dropping loops prior to the line pulling tight.

This is what a properly loaded flat load should look like when completed. Notice the two sets of pulling loops. These loops provide the option of pulling with one or two firefighters, depending on the situation. Make sure to have these loops on both sides, allowing for deployment from either side of the apparatus. (Photos by author)

To properly load the flat load in a double-stack hosebed, use the following steps:

If you are loading the flat load on a single-wide hosebed, use the same steps except when alternating stacks while loading the hose; instead, you should load the hose on top of itself in a single stack.

Since it is a drag load, at no time during the advancement should you place the hose on the firefighter’s shoulder. By keeping the hose on the ground during the stretch, the firefighter’s center of gravity is not raised the way it sometimes is with other hose loads; this makes for a safer stretch. By dragging the hose, the firefighter can stop and start the stretch as needed. Simply placing the loops and nozzle on the ground allows for the completion of another task. You can start this stretch again by picking up the pulling loops and nozzle, and continuing. Another advantage of a properly deployed flat load is that the line is already flaked in the proper position, in line with the entry point. 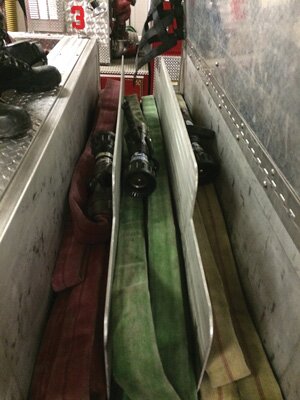 One common mistake is to serpentine the hose at a 90° angle just before reaching the front door. By doing this, you create pinch points along the bottom of the doorframe as you stretch the line into the building. Keeping the hose lined up with the doorway will ensure an easier advancement. When properly deployed, the first coupling should also be near the door. This ensures that at least 50 feet of line is ready for advancing. 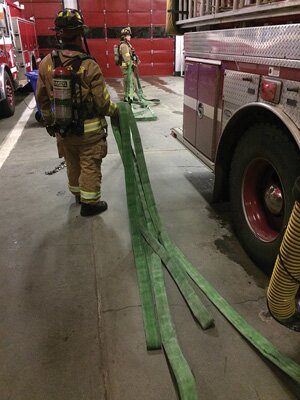 When deploying with two firefighters, the first firefighter reaches through the top two pulling loops and walks away from the apparatus, allowing the hose to be dragged behind them. The firefighter needs to control the nozzle with his opposite hand as he pulls out the line. 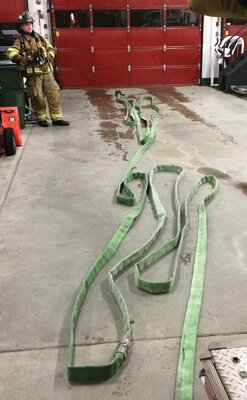 Once completed, the hose should be flaked in line with the doorway. Flaking the hose in the direction of travel will avoid creating additional pinch points at the bottom of the entry point, making for a quicker stretch into the structure.

Like all types of preconnects, the flat load also has a disadvantage: cornering. Remember, you will have approximately six to eight feet of looped hose dragging behind you. When approaching a corner, you will need to “go wide” to allow the hose to be pulled around the corner without becoming stuck. Exercise special caution when dragging hose between vehicles. Car tires make for stubborn pinch points; they are especially capable of grabbing onto the hose or coupling and trapping it between the tire and the road.

Regardless of what type of preconnects your department uses, all firefighters require continued training on loading and deploying. Keep training and keep stretching lines. Getting water on the fire will make all the problems go away.

ADAM IVERSON is a lieutenant with the Manchester (NH) Fire Department. He has an associate degree in fire science and a bachelor’s degree in fire service management. Iverson is an EMT-Intermediate and an instructor with the New Hampshire State Fire Academy.