An Underwriter's Laboratory plate (UL) can be found on every fire apparatus in North America with a rated pump. This article will explain the purpose of the plate, what it is used for and what it cannot tell the pump operator.

In Canada, the UL plate is often referred to as the "ULC plate." Although the Canadian version typically uses metric the intent is the same.

The presence of a UL plate tells the fire department and pump operator that the pump meets all American or Canadian standards and guidelines set out by NFPA 1901, the Standard for Automotive Fire Apparatus. The plate tells the operator what the fire pump was tested at to achieve maximum flow rates at 100% of the pump’s operating capacity. Each pump goes through a series of tests known as the “acceptance test” by a UL-approved vendor before it can be rated.

The plate should be found near the pump panel. If your apparatus does not have a plate it is likely that it is not a rated pump.

Before we deconstruct the plate it is helpful to review the relationship between flow and pressure as it applies to centrifugal pumps found in fire apparatus.

The Relationship between Flow and Pressure

This happens because the pump imparts velocity (kinetic energy) to the water moving through the pump and further restricting the discharge causes more of this velocity to be transformed into pressure energy.

From time to time this relationship is simplified by using the figures on the UL plate to explain the effect of flow vs. pressure. However, as we will see below, the relationship is not as straightforward as it would appear.

What’s on the UL Plate 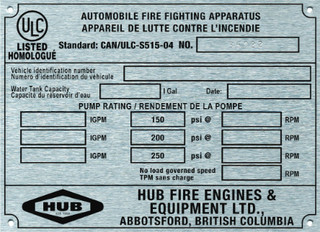 In addition to the pump rating, the following information can be found on the UL plate:

The pump ratings are based on flow in litres per minute (LPM), pressure in kPa and engine speed in RPM.

The reason that flow, pressure and engine speed are used is that they are all variables in the affinity laws, a series of equations used to predict what effect speed or impeller-diameter changes have on centrifugal-pump performance. Affinity laws do not take into account changes in efficiency at different flows & pressures. Also, impeller-diameter changes are not an important factor for pump operators since the impeller size is fixed for operational purposes.

Do not confuse engine RPM with pump RPM. “A fire pump requires an average of about 3,500 RPM to achieve the necessary volume and pressure required for firefighting operations but the diesel engines on virtually all of the fire apparatus built today are governed somewhere between 1,800 and 2,100 RPM. At typical pump operations these engines are running between 1,500 and 1,700 RPM. Therefore, speed increaser/pump transmission ratios are roughly 2.25 to 1.” [1]

The pump ratings are listed using three constants which remain the same for all pumps within a certain category. For pumps which are rated at less than 12,000 LPM these are:

According to Waterous “these somewhat arbitrary performance points were selected to ensure that the pumping system is capable of various flow rates at various pressures that may be needed to extinguish fire.” [2] Given this fact, it is important to realize that although there is a relationship between pressure and flow, the performance points found on a UL plate are not a good indicator of the pumps ability to flow water at various pressures. This crucial detail will be revisited at the end of this article.

Now that we know what to expect on a UL plate we will look at the acceptance tests that are used to find the values for flow and speed for a specific pump (remember that the pressures used for the tests are constants depending on the test).

A UL-approved vendor will carry out the acceptance test using the UL specification which is based on NFPA 1901 and 1911. The information below is not identical to the “New Apparatus Acceptance or UL Test” which is conducted by an independent agency for the manufacturer and is approximately 3 hours in length. It has been simplified for the sake of this article.

The Importance of Draft

The use of a water supply from draft relies on a properly functioning vacuum seal and ensures that any discharge from the pump is solely the result of the pumps ability to flow water.

According to NFPA, field pump tests (but NOT acceptance tests) are permitted to use a hydrant provided that it is capable of flowing more than the rated capacity of the pump. Since the net pump pressure is the Discharge Pressure minus Intake Pressure, the static pressure of the hydrant must be added to the net pump pressure. For example, if a hydrant supplies 600 kPa then the 100% rated test must be performed at 1,600 kPa (600 kPa + 1,000 kPa). Unfortunately this complicates matters when performing the 50% test since pressure must be increased to 2,300 kPa (600 kPa + 1,700 kPa). These pressures may start to approach the rated capacity of the plumbing and any weak links may give way, potentially damaging the pump.

Understanding these variables is critical to understanding the conditions under which the tests are made. Different hose and nozzle layouts are used to reach the three test points. This is not an adequate test of the pumps performance other than to state that the pump will discharge 100% of its rated output at 1,000 kPa.

Once an apparatus is parked and the draft supply is ready discharge hoses and nozzles are connected as needed depending on the pump capacity and test. Assuming the pump has a capacity of 3,785 LPM, the following setups would be used to test the pump:

(Each test uses a different number of hoses to take into account friction loss for different flow rates and nozzle sizes.)

For each test the pump is started and pressure is developed. The procedure for each test is roughly as follows:

Once the tests are concluded, the flows and pump rotations are averaged for each test. These are the numbers that appear on the UL plate.

The UL plate is helpful to the pump operator in two distinct ways.

As a benchmark for field tests and annual pumping

Since the UL plate was developed when the pump was new it serves as a benchmark for field tests and annual pump testing following the acceptance test.

Even normal use will reduce the efficiency of the pump over time and pumps that experience damage to the impeller or other components will demonstrate much lower throughput. When flowing large amounts of water the pump operator can tell if the engine is working harder than it should.

For example, if a pump rating requires 1,666 RPM to flow 7,070 LPM at 1,000 kPa but the pump operator notices that the pump is actually spinning at 1,900 RPM to deliver this output, he or she can conclude that something is amiss. This can serve as a first line of defence for the apparatus technician.

As a guideline for working with two-stage pumps

According to Waterous, “pump performance is better with a two-stage pump over almost the entire operational range, and particularly when operating at volumes less than 70% of rated capacity and pressures greater than 1,000 kPa.” [4]

This corresponds well with the the second test on the UL plate (recall that the tests are at 100%, 70% and 50% of rated capacity). Knowing this, pump operators can make a decision on whether or not to run the pump in pressure (series) mode or volume (parallel) mode.

The short answer is that the pump should be run in pressure mode for anything requiring less than 70% of capacity and volume mode for capacities of 70 to 100%. This allows the pump to flow water at higher pressures with less work. The long answer is much more complicated and will need to be explored in a separate blog post.

UL plates are not an indicator of pump performance!

As mentioned above there is no direct link between the test information on the UL plate and the pumps ability to perform over a wide range of volumes and pressures. To understand the true capability of their pump, the operator needs to become familiar with some of the theory behind pump efficiency and the performance charts for the model of pump used in the apparatus. 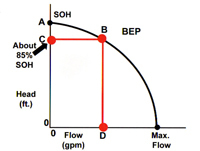 Every centrifugal pump has a “best efficiency point” or BEP. This is the intersection of flow and pressure where output is maximized and vibration, re-circulation and cavitation are minimized [5]. Larger pumps have a higher BEP than smaller pumps but most pumps can operate down to 50% of BEP without any problems [6]. Pumps operating at below 10% of BEP will not have adequate flow to remove heat build-up and must be recirculated.

The BEP of a fire pump is 68 to 75% of shutoff head or SOH. [7] “Shutoff head is a simple concept: if you were to pump into a vertical pipe, the pump would push the liquid up into the pipe to a certain point beyond which no more elevation could be obtained. Flow becomes zero as all the energy of the impeller is invested into maintaining elevation. This is the shutoff head.” [8] For pump operators, SOH is best understood as the maximum pressure that the pump can generate. In industrial pumps BEP is closer to 85%.

Pump operators often have little control over operational pumping needs since fire doesn’t care about BEP and the critical application rate required will be different in every situation. That said, why is it important to understand the BEP of your pump? Knowing when your pump is working outside of its best efficiency point helps you to better predict when your pump is going to be working hardest and the actions you can take to make things easier on your pump. You will know when re-circulation should be applied to reduce heat buildup and when relay pumping should be used to reduce the wear and tear on your pump over drawn out pumping operations. 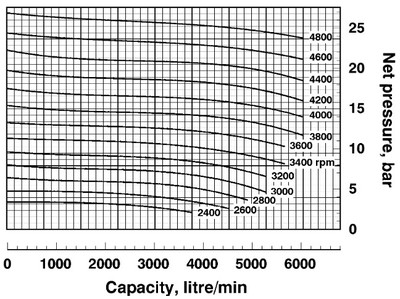 Secondly, it is important to review the pump performance charts for the model of pump used in your apparatus. We know that the 100% test on the UL plate is performed at 1,000 kPa. If this is mistaken for BEP pump operators will not know what their pump is actually capable of doing. Let’s examine a performance curve from a Waterous split-shaft fire pump. Be aware that these charts vary from pump to pump and are dependent on the size of the impeller so you will need to do some digging to find the correct chart for your apparatus.

This is an extreme example but it helps to demonstrate that fire pumps are typically capable of much more than their rated flows and pressures found on the UL plate.

Every pump operator should have a goal of “knowing their truck” and the fire pump is a massive part of this responsibility. In summary…